Start your 6 month countdown to #Tokyo2020 with a bang!! 🗼🌉🎇@Olympics pic.twitter.com/XzaIrcoTMS

Update by the Tokyo Organising Committee of the Olympic and Paralympic Games:

A total of 43 venues—eight new permanent venues, 25 existing sites and 10 temporary venues—will be used at the Tokyo 2020 Olympic Games. All but one of the new permanent venues are already complete and the overall preparation of all venues is progressing on schedule. Last month, the new Olympic Stadium – a state-of-the-art venue that will serve generations of athletes and spectators to come – was officially opened to the public and on New Year’s Day hosted its first official sporting competition.

The residential buildings of the Athletes’ Village were completed in December 2019. Members of the media will get their first look at the Village Plaza, to be constructed completely from timber donated from 63 local municipalities in all 47 prefectures, next week. After the Games have ended, the Plaza will be dismantled and the timber returned to the donor municipalities to be reused in local projects, connecting communities throughout Japan to the legacy of the Tokyo Games.

Close-up of a building in the #Tokyo2020 Olympic Village. Seems almost completed pic.twitter.com/OLhcXaswfl 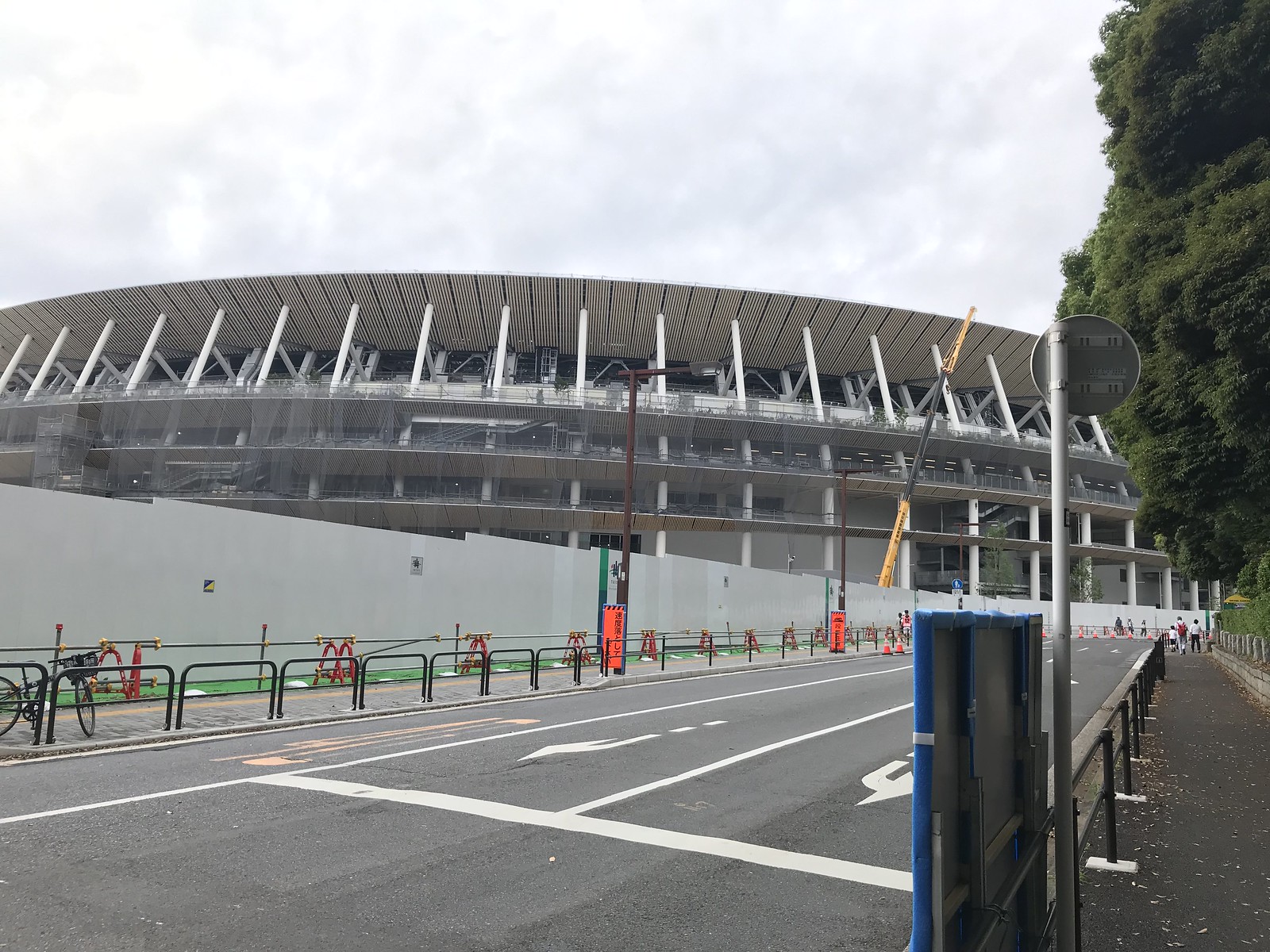 During its seventh visit to Tokyo (3-5 December), it was clear to the International Olympic Committee (IOC)’s Coordination Commission that the Tokyo 2020 Organising Committee is on track to host unifying Olympic and Paralympic Games.

“I can only reiterate what IOC President Thomas Bach said during his recent visit: these Olympic Games will bring people together in a spirit of hope and determination,” said IOC Coordination Commission Chair John Coates. “All of the ingredients for success are here. Venues are on time, stakeholders are engaged, and you can feel the power of sport everywhere.

“With this high level of preparation, Tokyo 2020 can continue to focus on the particular Tokyo issue of potential adverse weather conditions and the transport issues that these Games face in a city the size of Tokyo. I am pleased to see that we have been able to make some important decisions this week, with the timing adjustments to rugby and mountain bike. With less than 600 days to go, we must all maintain the momentum and work together to make the Olympic Games a success in every way, including leaving a lasting legacy as strong as that of 1964.”

As a result of collaboration between the IOC, Tokyo 2020, the IOC Medical & Science Working Group, the relevant International Federations, athlete representatives and Olympic Broadcast Services (OBS), changes to the session competition schedule have been confirmed.

Morning sessions for rugby will now finish by 12 p.m., while evening sessions will begin at 4.30 p.m. Likewise, mountain bike will now start at 3 p.m. in order to ensure better conditions for the athletes and spectators. Work is ongoing on other endurance events like marathon and race walking, with the aim of confirming these events by the end of the year.

The IOC Coordination Commission visited the locations of four Olympic venues, including the Ariake Arena, the Ariake Gymnastics Centre, the Olympic Promenade and Yokohama Stadium.

The Coordination Commission then paid its first visit to the Olympic Promenade, which will connect seven competition venues within walking distance. The adjacent areas such as Aomi and Ariake will feature some new sports that will appear on the Olympic programme for the first time. The promenade, which offers spectacular views of the iconic Tokyo Bay and is a short trip from the Olympic Village, is expected to attract thousands of fans and serve as a hub for young people.

The visit concluded with a stop at Yokohama Baseball Stadium in the Kanagawa prefecture, where Olympic gold medal softball player Eri Yamada and Olympic baseball bronze medallist Daisuke Miura, together with Yokohama professional baseball players Yasuaki Yamasaki and Kenta Ishida, joined the Coordination Commission to review the plans for the Games. Home to one of Japan’s professional baseball teams, as well as Japan’s first multipurpose stadium, the facility will soon be upgraded to include an additional 6,000 seats, which will improve its existing capacity needs.

“Baseball in Japan pushes the game by skills rather than by power, so I will do my best to be selected by the team for Tokyo 2020,” said Yamazaki. “It is the national game in my home country, Japan, so I would warmly welcome people from abroad, and I’m hoping that I can show them great competition during the Olympics.”

Not only will improved infrastructure serve the people of Tokyo for decades to come, but the Games are also acting as a catalyst for Tokyo 2020’s metropolitan government partners to advance human rights policies and address city accessibility issues. These advancements reflect the Organising Committee’s vision that sport has the power to change the world.

“With less than 600 days to go until the opening of the Games, discussions are becoming increasingly concrete,” said Tokyo 2020 President Yoshiro Mori. “In the past week, we’ve had the opportunity to report on the status of our preparations to the ANOC General Assembly, the IOC Executive Board and this Coordination Commission, and have received very positive feedback. President Bach said that he had never seen a host city so prepared two years ahead of the Games. We will make sure not to let such positive feedback go to our heads, and will redouble our efforts to work as a team towards a successful delivery of the Olympic Games.”

An increase in engagement was also notably evident, as volunteer sign-up applications surpassed Tokyo’s goal, with more than 110,000 submissions from both domestic and international audiences as people seek to take this opportunity to become part of the Olympic Games experience.

Demonstrating that these Olympic Games are for all of Japan, government leaders from the Japanese prefectures of Kanagawa, Yamanashi and Shizuoka were also on site to provide updates on the respective competitions they will host.

Several members of the Olympic and Paralympic movements also came together for the Coordination Commission for this visit, offering their expertise to ensure that athletes, fans and stakeholders all experience unforgettable Olympic Games. These included National Olympic Committees – Brazil, Great Britain, Japan, Oceania National Olympic Committees, Sweden and the USA – and TOP partner representatives – Bridgestone, Intel, Panasonic, Toyota and Visa.

Olympic Agenda 2020’s the New Norm continues to benefit the Tokyo 2020 budget, resulting in an additional USD 2.1 billion in savings. This brings Tokyo’s total savings since the start of Olympic Agenda 2020 to USD 4.3 billion. The Organising Committee is working on its third version of the budget, and is expecting to maintain a balanced operating budget which will be entirely privately funded, translating into no cost for the taxpayers.

Examples of recent New Norm implementations include the reduction of the size of the International Broadcast Centre (IBC), the reduction in accredited seating areas to increase the number of tickets available to the public, and turnkey solutions for the Games-time website and mobile app.

This is what the Gymnastics Centre will look like at #Tokyo2020 pic.twitter.com/sgDhLLztFo

As you can see, the Gymnastics Centre will use a lot of wood. The building will symbolize the Japanese wooden culture (like the Olympic Stadium)#Tokyo2020 pic.twitter.com/cAAfbwUReI

A close-up view of the wooden beam that will be part of the wood roof at the Tokyo Olympics’ new gymnastics venue. pic.twitter.com/dZhQp5Kclc