Deodoro is the 2nd largest cluster and is located to the northwest of the centre. This district has many existing venues that were used during the Pan American Games in 2007, for example the Shooting and Equestrian Centres.

More photos after the break.

END_OF_DOCUMENT_TOKEN_TO_BE_REPLACED

The Deodoro Sports Complex was designed by BCMF Architects (Bruno Campos, Marcelo Fontes and Silvio Todeschi) for the Rio 2007 Pan-American Games, including in the same cluster the Shooting, Equestrian, Archery, Hockey and Modern Pentathlon facilities. All venues already meet international standards, and will need just minor adjustments and complements for the Rio 2016 Olympics. The cluster is already a world-class legacy, which has successfully triggered the renewal and further development of important suburban region.

The SHOOTING CENTER has approximately 50.000m2 of built area, landscaped on a 150.000m2 site along one of the most important access vectors of the city (a hybrid of avenue and motorway). The project deals with the complex issues of a unique suburban context comprising of a military neighborhood, a densely populated favela, a rough industrial area and a vast wild landscape all mixed together. Few materials, strong horizontal lines and an enigmatic grid of wooden baffles predominate in this stark venue located on a trapezoidal plot in a breathtaking valley surrounded by mountain peaks.

A scale model of the Rio 2016 Olympic canoe slalom course, a key element of the X-Park that will be located within the Deodoro Olympic Park, has undergone extensive testing in a laboratory at Prague’s Czech Technical University. Commissioned by specialist whitewater designers John Felton and Bob Campbell, whose US-based company was behind the London 2012 slalom course design, the 1:13 model (one 13th the size of the real thing) has helped to confirm that the Rio course will meet Olympic technical specifications.

For the first time, obstacles were magnetically attached to the model’s metal base plates, allowing the research team, led by Czech world champion father-and-son canoeists Jaroslav Pollert Senior and Junior, to quickly reposition them and better observe the water flow in a range of scenarios (see a video of the project here). Obstacles will also be interchangeable, albeit not magnetically, on the finished course, enabling it to be tailored for different watersports.

“We’re always trying to improve on the previous version,” said managing director Campbell. “London was the best we had done up to then, but this time we have been able to slightly narrow the channels and reduce the overall height with no loss of performance, which will help reduce costs. We have introduced efficiencies that will help commercial viability for the legacy operator. It would be great to realise that same legacy for Rio.”

Many of the successful elements of the design for the London 2012 venue at Lee Valley have also been applied to the planning of the Rio 2016 venue. “The London course shined during the 2012 Games, but it has also left a huge legacy for anyone wanting to experience whitewater rafting or canoeing, and even for training rescue teams,” said Campbell.

Sebastián Cuattrin, Rio 2016 Canoe Sport Manager, competed in four Olympic Games, finishing eighth in the K1 sprint competition at Atlanta 1996. “The testing in the Czech Republic is very important because it’s through this model that the International Federation can confirm that its technical requirements are being met. They are testing the behaviour of the water in relation to the obstacles. It’s crucial,” he said.

The Rio Olympic Whitewater Stadium will feature 280m of artificially created rapids, with all the water being pumped from a 25,000m3 lake nearby. Fully modular, man-made obstacles will be placed along the channel to simulate the rocks found on natural rapids, creating waves, pools and eddies through which athletes have to race on a designated route from top to bottom.

Preparative workstarted at the site in August, with earth clearing and the installation of construction infrastructure, and final construction drawings are due to be delivered in November. The finished project is set for delivery in February 2016, with a test event scheduled for November 2015.

“Test events are an opportunity to adjust and perfect the venue and its operations in order to have everything 100 per cent ready, without surprises, for the Games,” said Roberto Ainbinder, Olympic Project Integration Director at the Municipal Olympic Company (EOM) in Rio de Janeiro.

“The canoe slalom course is a complex venue, with sophisticated electrical and hydraulic equipment that need to be exhaustively tested before they enter regular use. This is true for the Games and for the legacy usage, when the canoe course, together with the Olympic BMX Centre, will comprise the X-Park, which will be open to the general public.” 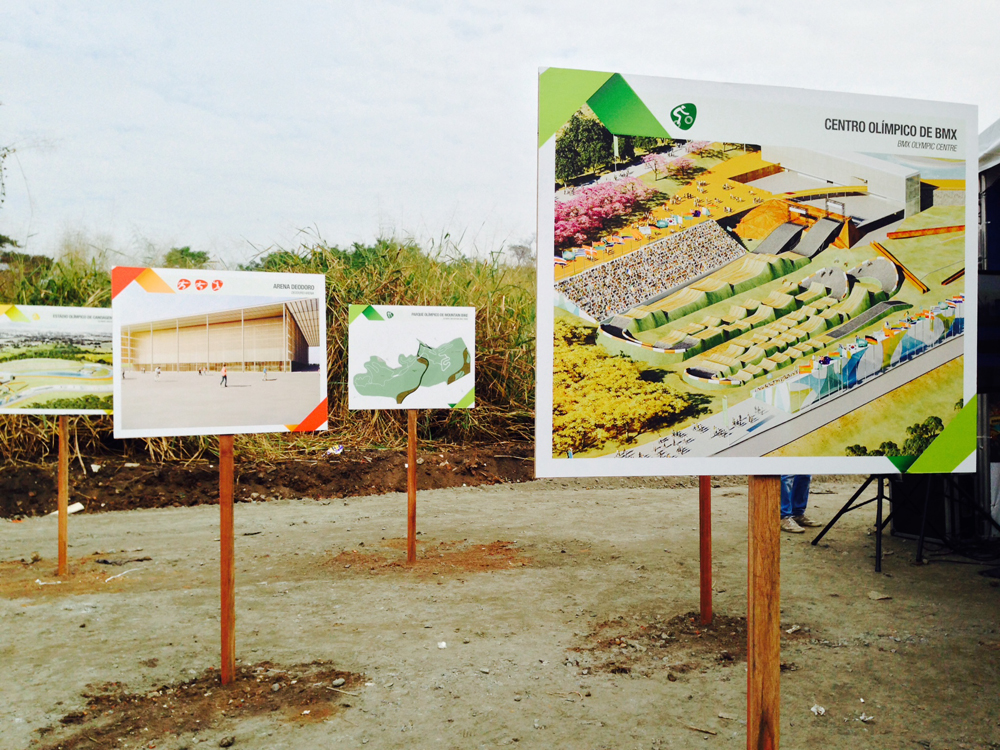