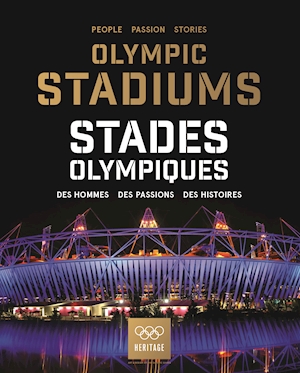 Curated and edited at the Culture & Education Programmes Unit, The Olympic Museum. Contributions by Tim Abrahams, Geraint John and Ben McCormick
Published by GILES in associations with the International Olympic Committee

About the Book
With a wealth of archival images, stadium stories and reminiscences by athletes, supporters and those who worked on the building and organisation, this new volume is a richly illustrated souvenir of the changing design and purpose of Olympic stadia over the past century. It shows how the International Olympic Committee works with Olympic venues to build an Olympic stadium that responds to the needs of the city, looking in particular at iconic stadia built to showcase architectural prowess and attract international attention. A timeline reveals how architecture has changed over the past century, and there are fascinating interviews with those who took part; athletes, architects, and the people who worked behind the scenes.

About the Author(s)
Tim Abrahams is an architectural journalist, digital editor for Drawing Matter and series editor of Machine Books. Geraint John, RIBA Dip Arch (UCL) CISRM MILAM FRSA is Honorary Life President of the UIA (International Union of Architects) Sports and Leisure Programme and former chief architect at GB Sports Council. Ben McCormick is a magazine and website journalist and editor and head of content at Redhouse Lane.