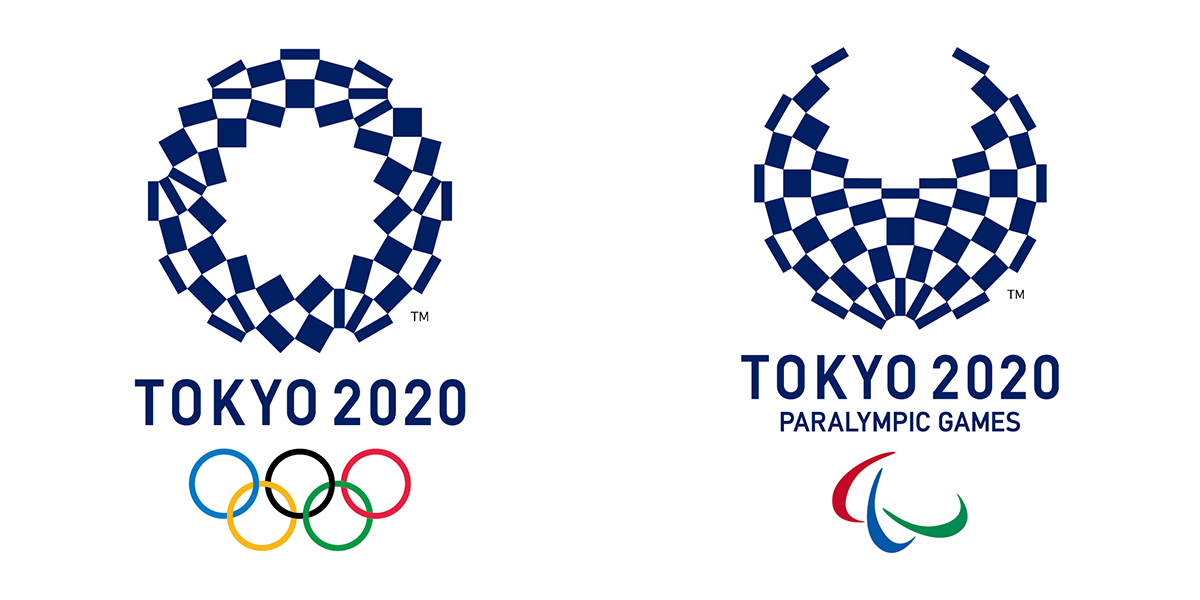 Origin of their names
The Tokyo 2020 Olympic mascot’s name was revealed as Miraitowa (pronounced mee-rah-e-toh-wa), based on the Japanese words mirai (future) and towa (eternity) combined. This name was chosen to promote a future full of eternal hope in the hearts of people all over the world.

The Tokyo 2020 Paralympic mascot’s name was revealed as Someity, (pronounced soh-may-tee) which comes from someiyoshino, a popular cherry blossom variety, and additionally echoes the English phrase “so mighty”. Someity has tactile cherry blossom sensors and exhibits enormous mental and physical strength. It represents Paralympic athletes who overcome obstacles and redefine the boundaries of what is possible.

Check their Profile!
Miraitowa has the same indigo blue ichimatsu-patterns as the Tokyo 2020 Games Emblem on its head and body. The mascot’s personality is derived from a traditional Japanese proverb that means to learn old things well and to acquire new knowledge from them. The mascot has both an old-fashioned aspect that respects tradition and an innovative aspect that is in tune with cutting-edge information . It has a strong sense of justice, and is very athletic. The mascot has the special ability to move anywhere instantly.

Someity is a cool character with cherry blossom tactile sensors and super powers. It can send and receive messages telepathically using the cherry blossom antennae on both sides of its face. It can also fly using its ichimatsu-pattern cloak. It is usually quiet, but it can exhibit great power when necessary. It embodies Paralympic athletes that demonstrate superhuman power. It has a dignified inner strength and it also loves nature. It can talk to stones and wind by using its super power, and is also able to move things by just looking at them.

The duo finally made their debut today and are already anticipating a busy schedule ahead.

Between December 2017 and February 2018, more than 75% of the elementary schools in Japan and a number of overseas Japanese schools took part in a selection process and voted for their favourite set of mascot designs.

Miraitowa and Someity live in the digital world, and can move freely between there and the real world via the internet. 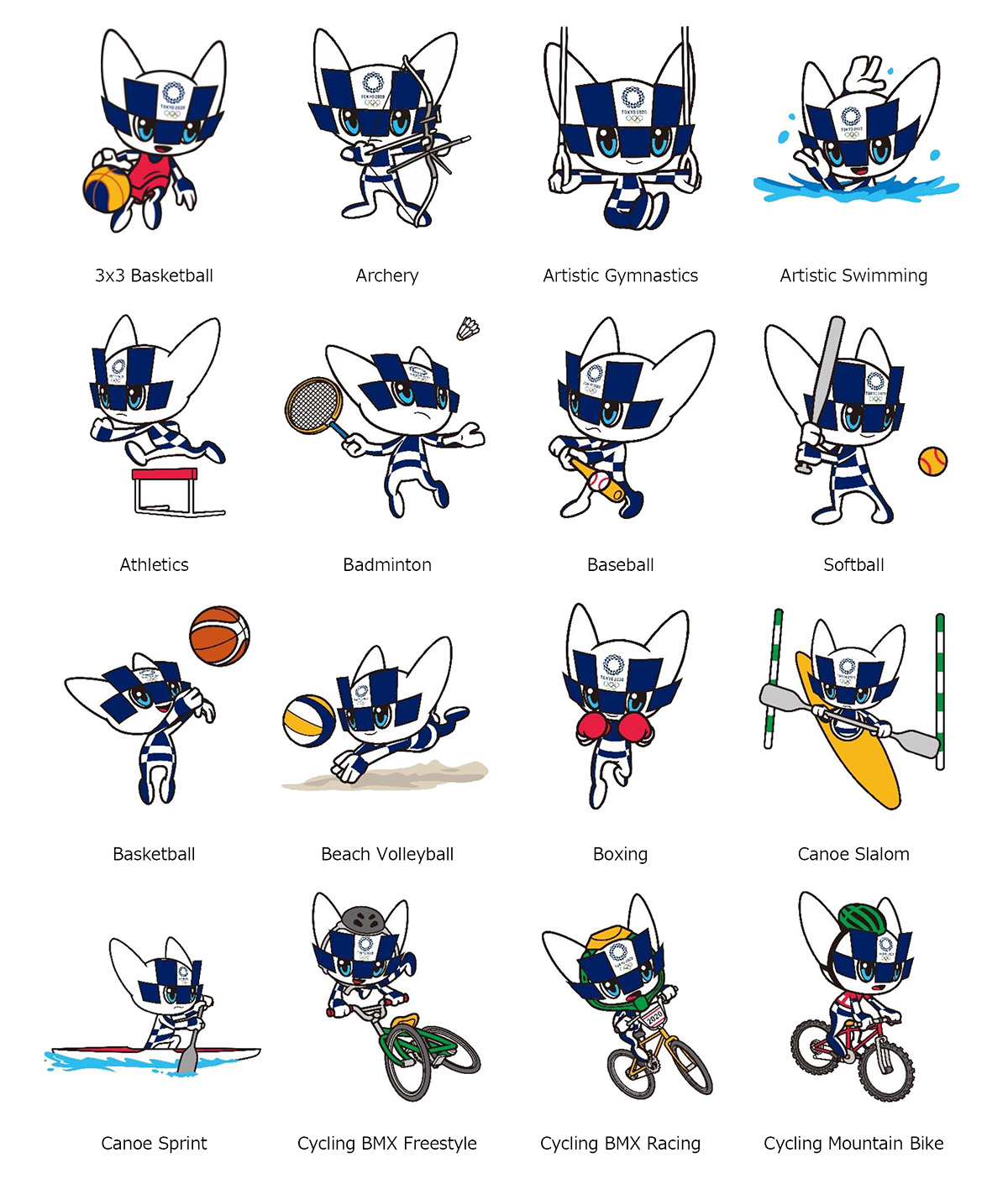 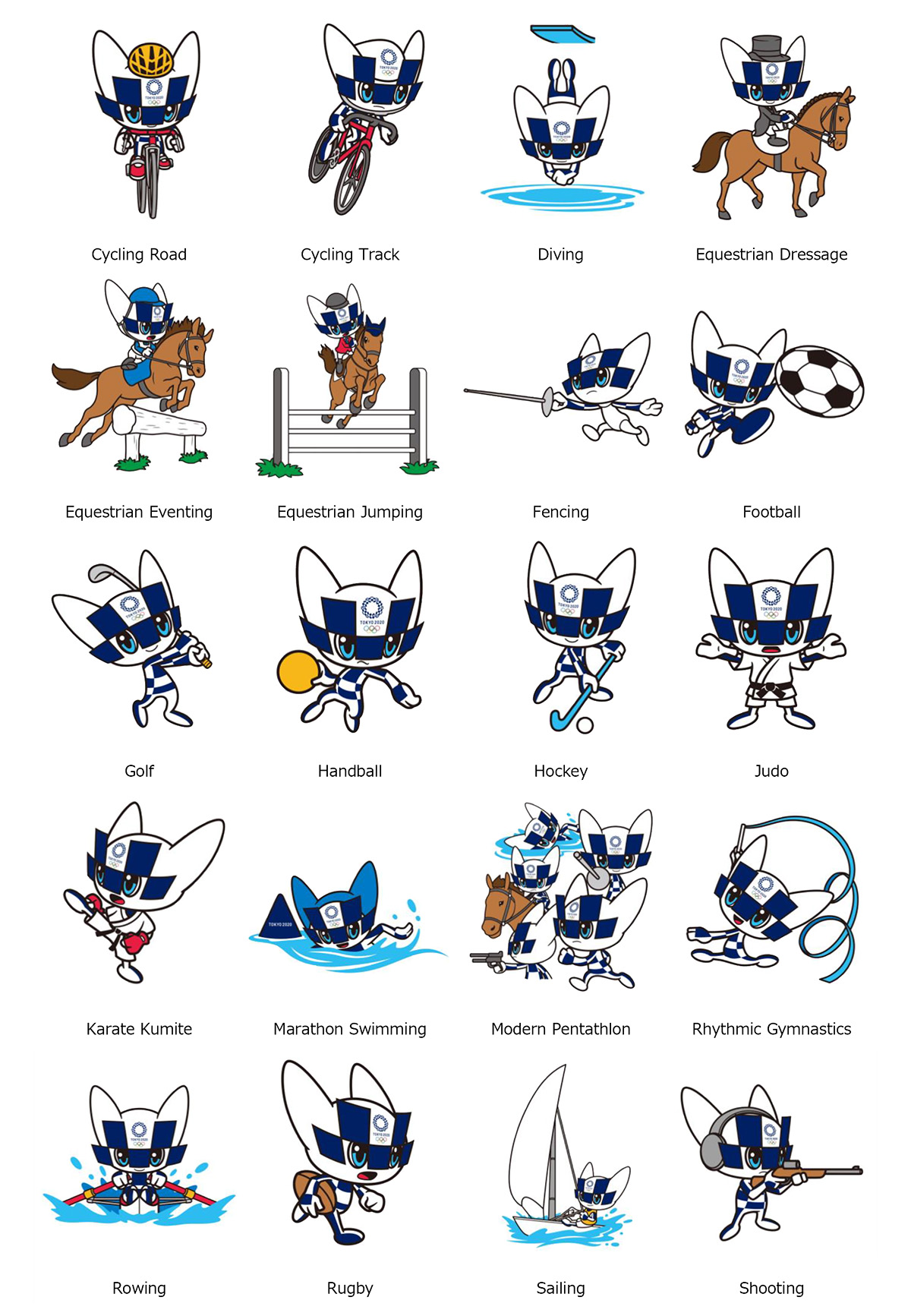 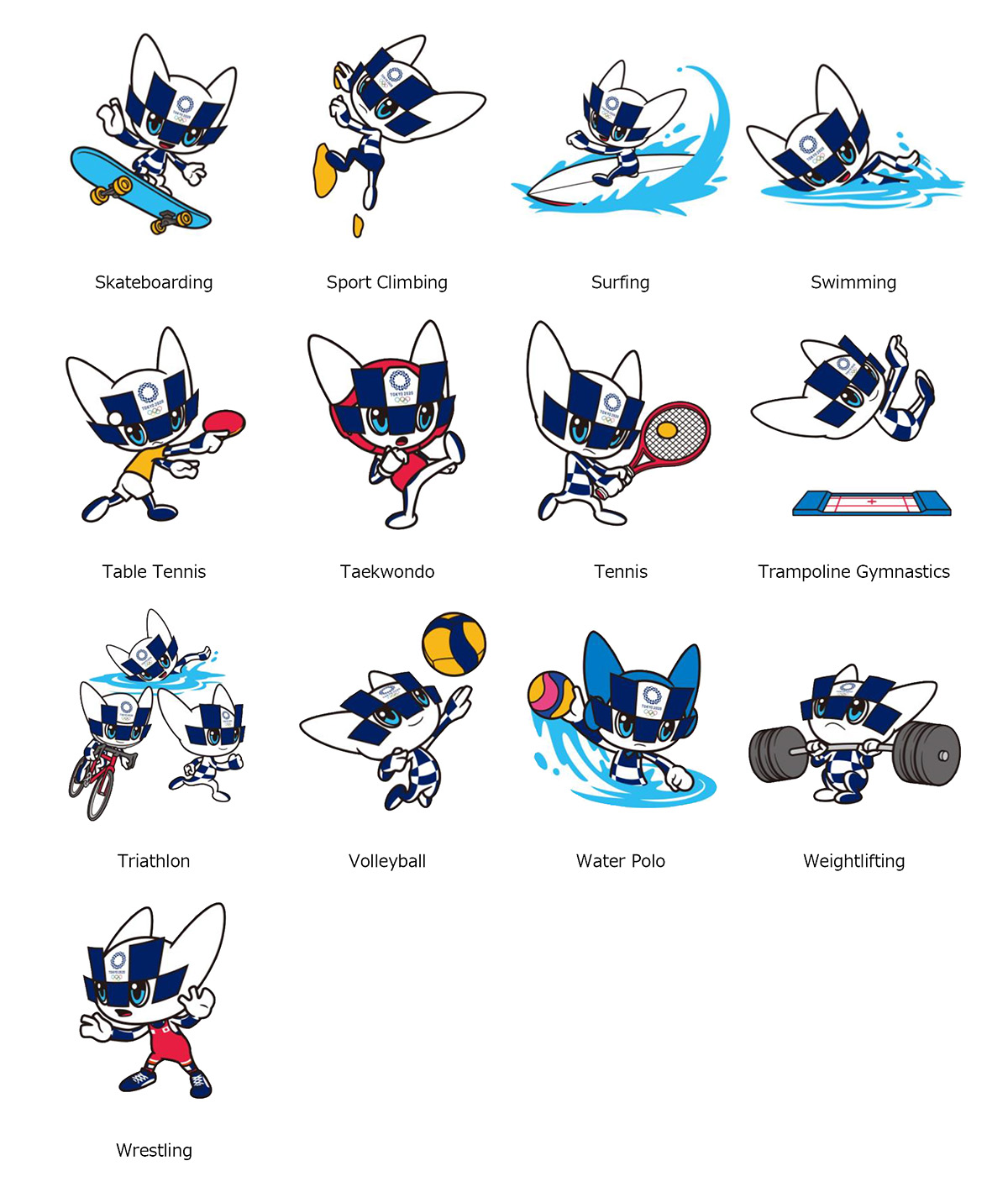 “It is a real honour to have participated in the design of the Tokyo 2020 sport pictograms. I have tried to express the dynamic beauty of the athletes through these pictograms, while respecting the legacy bequeathed by the pioneers of the Japanese design industry in their designs for the Tokyo 1964 Games. The 2020 designs took us almost two years to complete and they embody the thoughtful input of the many people involved. I hope that these pictograms will inspire everyone and help generate excitement for the different sports at Tokyo 2020, and that they will colourfully decorate the Tokyo 2020 Games.”

The design of the Tokyo 2020 Olympic medals reflects the concept that in order to achieve glory, athletes have to strive for victory on a daily basis. The medals resemble rough stones that have been polished and which now shine, with “light” and “brilliance” their overall themes. The medals collect and reflect myriad patterns of light, symbolising the energy of the athletes and those who support them; their design is intended to symbolise diversity and represent a world where people who compete in sports and work hard are honoured. The brilliance of the medals’ reflections signifies the warm glow of friendship depicted by people all over the world holding hands.

In order to come up with a range of designs from which to choose, Tokyo 2020 held a competition open to professional designers and design students which attracted more than 400 entries.
Tokyo 2020 medal design competition (in Japanese)

International Olympic Committee regulations stipulate that obverse medal design should include the following elements:
-Nike, the Greek goddess of victory, in front of the Panathinaikos Stadium
-The official name of the respective Games, in this case the Olympic Games Tokyo 2020
-the Olympic five rings symbol

The ribbon will employ the traditional Japanese design motifs found in ichimatsu moyo (harmonised chequered patterns) and kasane no irome (traditional kimono layering techniques) in a modern presentation. The ribbon is designed to be a reflection of Japan itself and of the way the country demonstrates “Unity in Diversity”. The design also promotes the Tokyo 2020 brand vision of “Innovation from Harmony”.

Silicone convex lines are applied on the surface of the ribbon so that anyone can recognise the type of medal (gold, silver or bronze) by simply touching it. Chemically recycled polyester fibres that produce less CO2 during their manufacturing process are used; these allow the ribbons to incorporate the Tokyo 2020 core graphic colours and to be extremely durable at the same time.

The design of the Tokyo 2020 Olympic medal case is inspired by the Tokyo 2020 Games emblem. Each case pays tribute to the Olympians who have reached the pinnacle of athletic achievement. Japanese craftsmen will carefully create the cases with a blend of traditional and modern techniques. Like each individual Olympian who steps onto the field of play, each medal case is distinct and has its own wood fibre pattern subtly infused into the design.

A total of 59 Olympic tickets and 25 Paralympic ticket designs for all competition events were unveiled. Delivery of the tickets will start in May.

The design of the tickets is based on the Look of the Games, the visual identity of the Olympic and Paralympic Games Tokyo 2020. It is inspired by the three types of rectangular shapes that form the Tokyo 2020 Emblems and the Japanese technique known as kasane no irome, a colour scheme used in the creation of fabrics used for kimonos during the Heian Period (794-1185). Having been traditionally used in the design of costumes for celebratory occasions, this colour scheme reflects the overlapping natural colours representative of each of Japan’s four seasons.

The designs of the tickets use four traditional Japanese colours:
– Kurenai (red). Since ancient times, red has been used often during celebrative occasions and is a symbolic colour of Japan.
– Ai (blue). Widely familiar to the people of Japan and globally known as a colour representing Japan. The colour of the Tokyo 2020 Emblems is also categorised under the ai colour.
– Fuji (purple). This is the colour of the Japanese wisteria and has been regarded as a beautiful Japanese flower since ancient times.
– Matsuba (green). This is the pine needle green colour that is often used for celebrative occasions.

The tickets also include the official Tokyo 2020 sport pictograms, designed to subtly communicate the characteristics and athleticism of each sport, as well as artistically highlights the dynamism of athletes. Olympic Games sport pictograms were first introduced at the Tokyo 1964 Games, which arose from a need to communicate visually to an increasingly international group of athletes and spectators. Since then, pictograms have been created for every edition of the Games.

Said Tokyo 2020 Spokesperson Masa Takaya, “We are very proud of the design of the Tokyo 2020 tickets, embodying as it does Japanese traditions and skills, and we hope they will please both Japanese and international spectators at the Tokyo 2020 Games. These tickets will not just be the door-opener to the venues for them; they will become memorabilia that they will cherish long after the Games come to an end.”

Exhibition of Tokyo 2020 Olympic and Paralympic Ticket Designs
This exhibition will be open to the public free of charge, allowing everyone to view the Tokyo 2020 ticket designs. 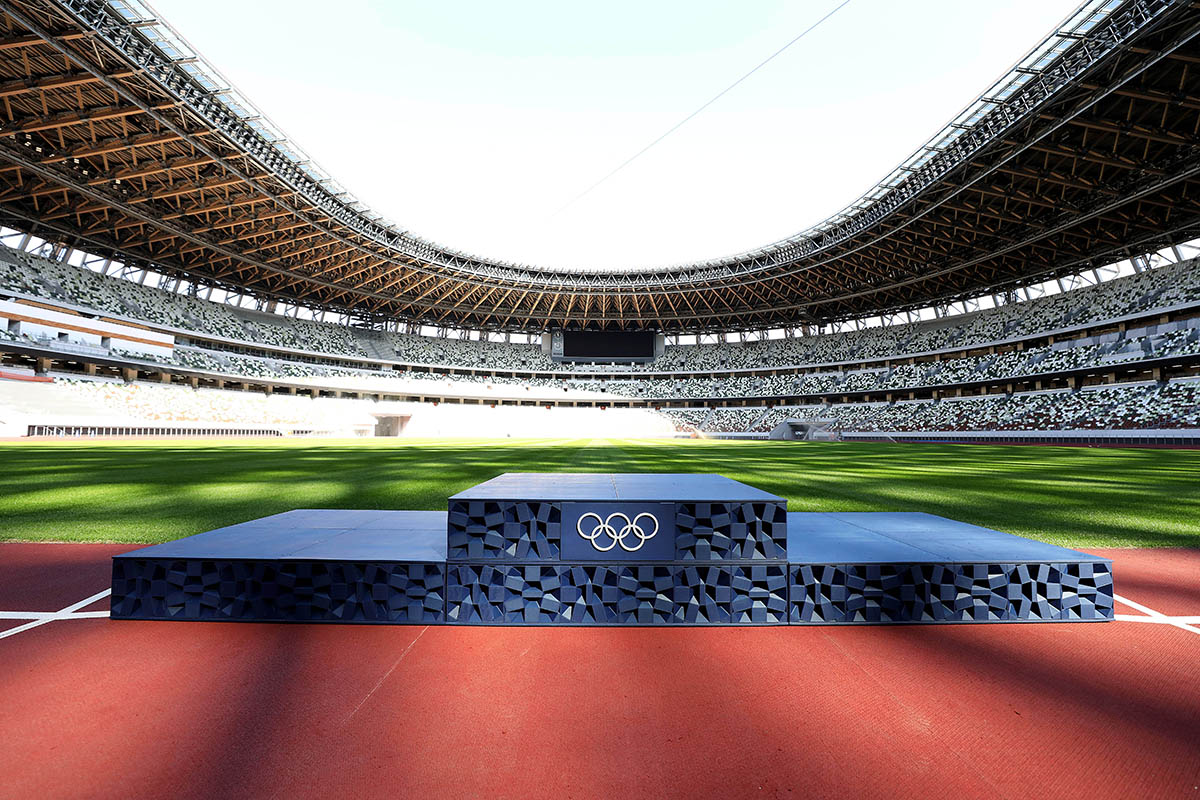 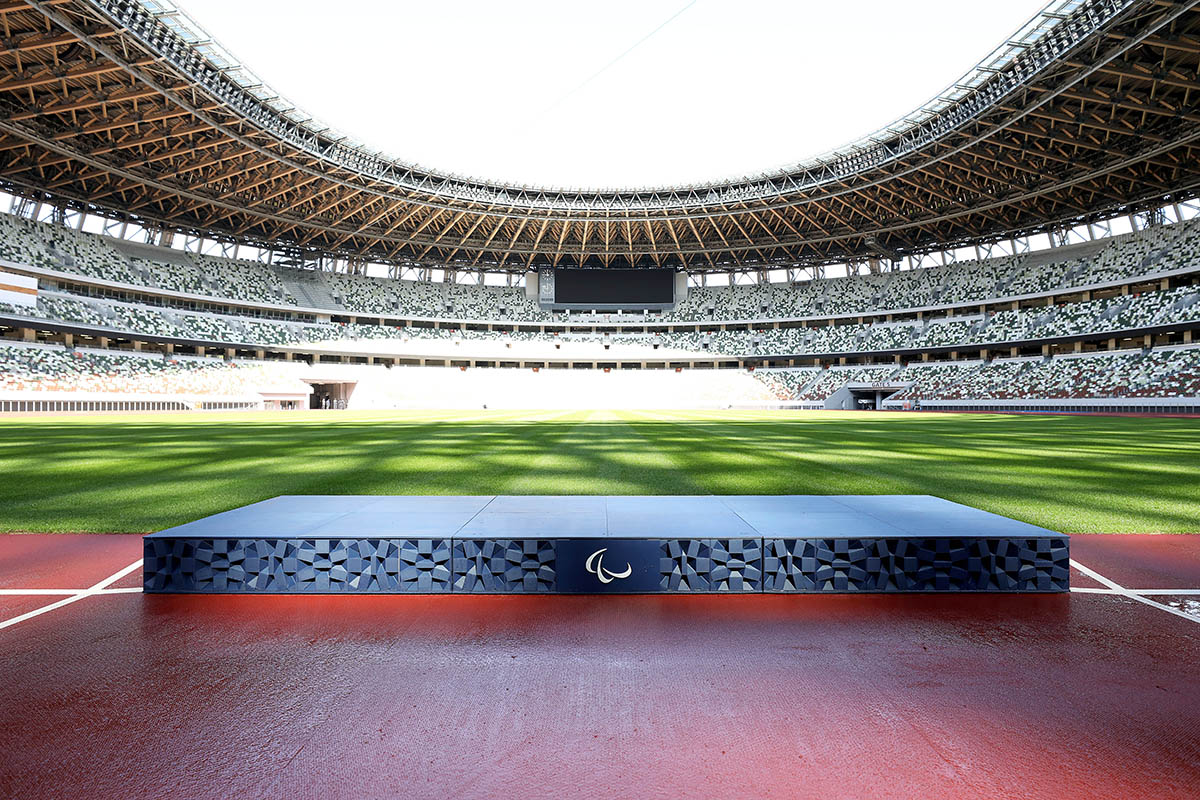 The Tokyo 2020 Olympic and Paralympic podiums were created using donated recycled household plastic waste with Worldwide Olympic and Paralympic Partner Procter & Gamble. Titled the Recycled Plastic Victory Ceremony Podium Project, the podiums were created with the purpose of showing the world the different ways in which a sustainable society can be realised, and engaged the whole population of Japan in the podium production process in an historic Games first. The podiums were designed by TOKOLO Asao, the designer of the Tokyo 2020 emblems, and embody the emblems’ message of “Unity in Diversity”. The podium sides feature a three-dimensional representation of the chequered emblem pattern “ichimatsu moyo”, a design in the traditional Japanese colour of indigo blue that expresses the refined elegance and sophistication that exemplifies Japan.

With the support of Professor TANAKA Hiroya of Keio University in Tokyo, an expert in digital fabrication techniques, the podiums were created using highly advanced 3D printer technology. In addition, aluminium waste recycled from temporary housing provided in the regions affected by the Great East Japan Earthquake was used to create the Olympic and Paralympic symbols embedded in the podiums, in collaboration with Tokyo 2020 Gold Partner, LIXIL Corporation. In approximately nine months, 24.5 tonnes of recycled plastic—the equivalent of around 400,000 bottles of laundry detergent—were collected and utilised in the construction of the 98 podiums that will be used during the Tokyo 2020 Games. 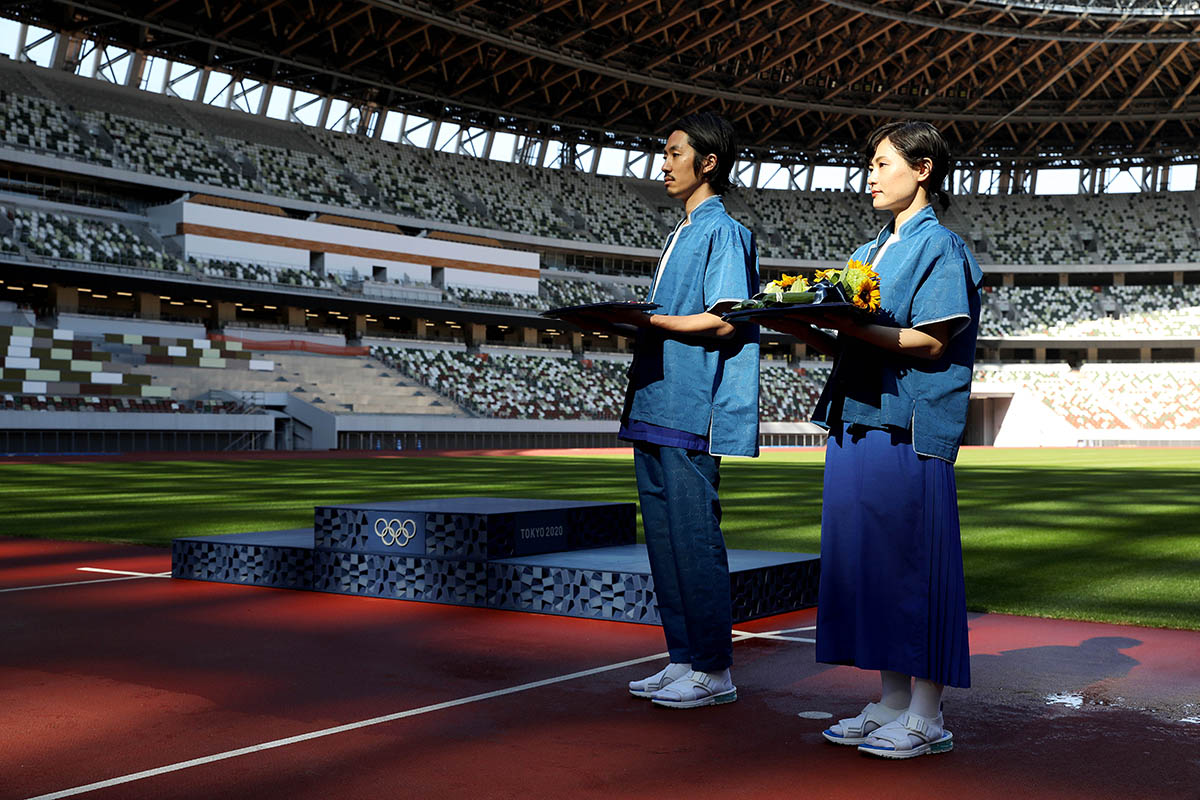 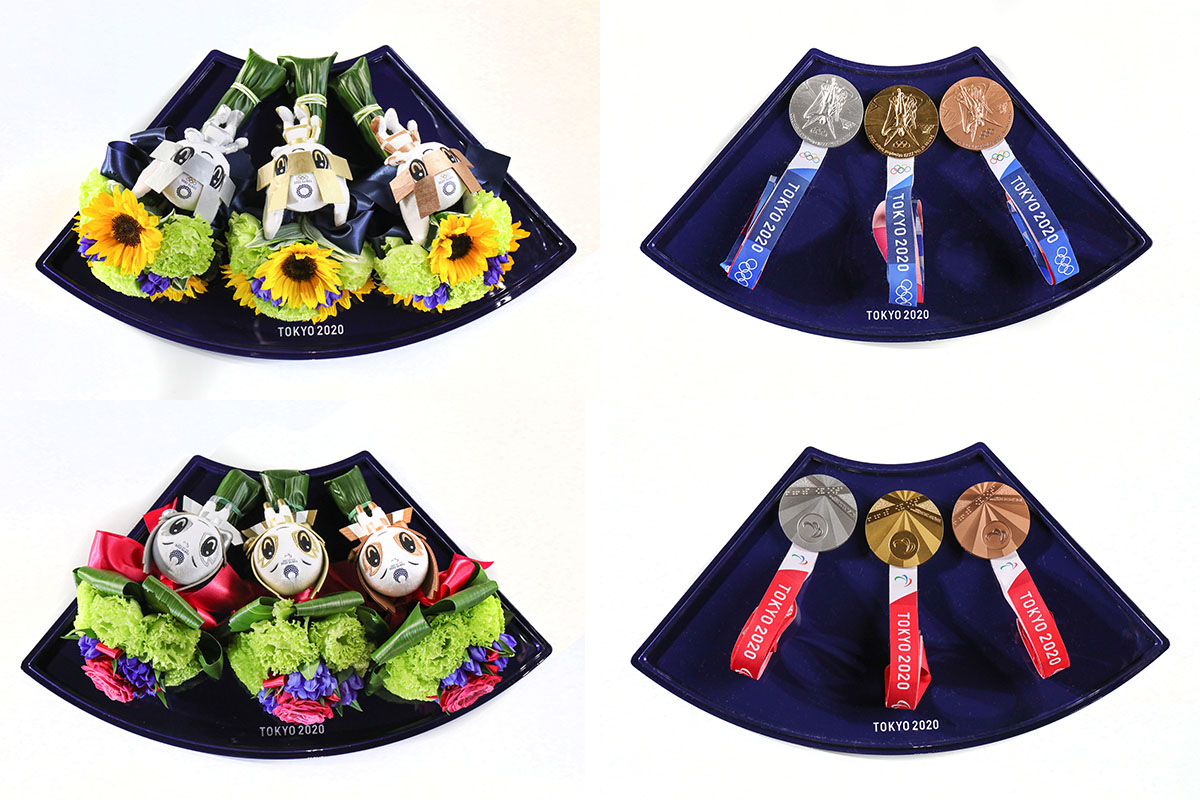 Based on the concept of modern ceremonial dress, the costume designs incorporate traditional kimono production techniques, such as “kasane” (layering), “ori” (weaving), “musubi” (knots), and “so-me” (dyeing), while also featuring the ingenuity of modern clothing design, such as cooling technology to make the wearer more comfortable in the summer heat. To represent the diversity of volunteers who will carry the medals and escort athletes at Victory Ceremonies, the volunteers themselves can choose between trouser- or dress-style versions. Environmentally-friendly recycled fibres have been used to make the costumes.

The Medal Trays have been produced using recyclable thermoplastic polymer and bear a traditional Japanese fan motif. Indigo blue, the base colour of the trays, is the deepest of the Tokyo 2020 core graphic colours, and intends to harmonise perfectly with the podiums and costumes.