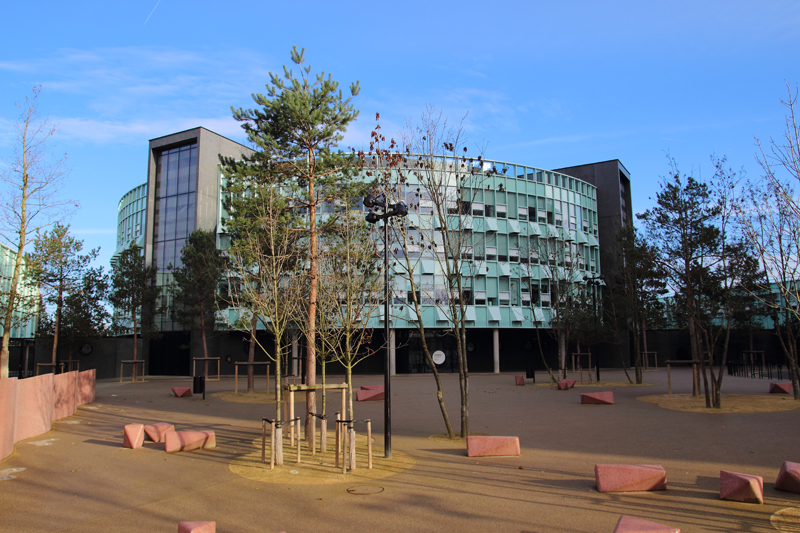 Conceived pre-Olympics and used during the 2012 Games (as both a gym and a security hub), Chobham Academy continues to work hard as a linchpin educational and civic campus on the eastern edge of one of Europe’s largest regeneration projects. As residential masterplanners of the Stratford City Athletes Village, AHMM was able to influence the project’s site and setting; shifting the land mass to create a high point and centrepiece for London’s East Village.

The All-Ages school – which opened to more than 1300 students aged 3-18 in September 2013 – serves Leyton, Stratford and the emerging community of the post-Games Park, both in and out of school hours.

Designed as part of a strong new urban grain whose pattern is reflective of existing London streets, a central five-storey drum marks the apex of a new grand axis. The drum faces the emerging community as well as the existing community and at the same time acts as the fulcrum for three connected buildings. A full-height atrium overlooked by open galleries on each floor defines the drum’s centre.

The infant school occupies a two-storey rectilinear block to one side of the drum, with its own entrance. A day care centre, currently run separately from the academy, has a directly south-facing play area whose five wall portholes will be ringed with bright Olympic colours. Here, the architectural language has been adapted to be as sensitive as possible to very small children for whom a single storey is a double height space. Nursery and reception spaces on the ground floor open onto their own play areas. On the upper floor teaching spaces share a top-lit corridor, with an external stair making a direct connection to the playground.

A ground level connection is made to the five-storey drum-shaped structure of the middle and upper school. A full-height atrium is overlooked by open galleries on each floor. It is pinched by two stacks of wedge-shaped ‘lobes’ projecting into it, subtly demarcating a more private area beyond for dining and cafe areas. Access to the playground is via a covered, external buffer space, a comfortable place on a rainy day. The main public entrance is a glazed box with discreet security and monitoring control, and secondary entrances link to the other buildings. The lobes hold more fully-serviced teaching areas, acoustically and thermally separated, and feature glass and spandrel panels gently inclined at opposing angles. Three roof terraces with dramatic views to the City and beyond are fully usable as open-air teaching spaces. Roughly a third of the building may be isolated to allow separation at age 11 or 12 if desired.

The Specialism Building is equipped with a theatre complete with rehearsal space and retractable bleacher seating, dance and drama studios, music rooms, art and design technology rooms top-lit via generous north lights and a sports hall. Entered from the playing fields during the school day, there is also an entrance from the public square; a continuous canopy here wraps around a corner of the building, a welcoming gesture recalling classic inter-war theatre and cinema architecture. The sports hall can be locked off from the rest of the school for community use through a third entrance.

The curtain walling employs deep cover caps to generate a crisp, well-defined grid, accented by sloping and projecting air intake cowls. The masterplan called for single-colour buildings in the Olympic Village, and these from a very restricted colour palette. All insulated spandrel panels are coated with a simple white colour, which reads as eau de nil when seen through the glass. This colour was also selected for the grid of aluminium mullions and transoms. The colour was mixed to order and matches perfectly the colour of the glass spandrel panels, transforming this from a standard treatment into something more powerful and unusual.

On parts of the specialism building, light grey concrete is acid-etched to bring out the silvery flecks of mica present in the mix and moulded into a deep, sinusoidal profile section.

Self-finished materials predominate, including blue engineering bricks to the atrium’s lower walls and exposed fair-faced concrete on ceilings and columns. The atrium is roofed with ETFE pillows; solar control patterning alternates between top and bottom surfaces, creating interest and revealing their form. They are supported by beams of glulam timber, a warm, natural material.

Where applied colour is used, this is done sparingly. Vestibule walls in the lower school and balustrading in the main building are of different primary colours, helping children mark their movement through the school daily and annually. Black joinery for doors and frames maintains their appearance for longer.

The use of such materials without additional applied finishes reduces cost, speeds construction and makes buildings durable in use, without the need to maintain ceilings and paintwork.

A new bridge, 95 metres in length and acting as a gateway from the north east, springs from the specialism building across the busy Temple Mill Lane and lands on a formed mound sitting within additional playing fields. Executed in COR-TEN® weathering steel, it is defiantly slender and an expression of the structural stress diagram used to create it, with external fins describing a ribbon of varying size along its length. Two double-V support ‘trees’, also of weathering steel, rest on pre-cast concrete piers. Providing safe transit day and night, concealed internal feature lighting diffuses through a series of portholes which respond to the rhythm of the fins.

Chobham Academy’s ambition is to provide a ‘place of exchange’ where the old and new east London comes together. The new buildings define space on a campus that is open, attractive, economical and sustainable.